The usage of the cat command is quite simple. For instance, if we had a file called cat_test.txt with the following contents:

Will output the contents of the file to standard out:

There are a few switches that allow you to control the output of the contents. The -n, or –number, will number each line of output: 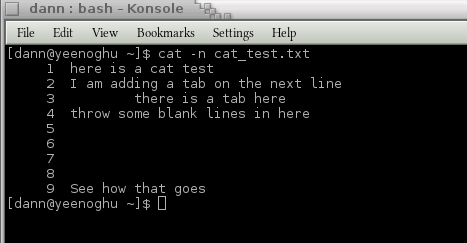 You can just number only the non-blank lines using the -b, or –number-nonblank, switch: 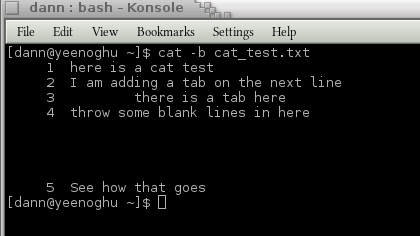 The -s, or –squeeze-blank, switch will remove repeated empty lines of output. This switch will not remove all blank lines, but only the second or more blank lines in a row. So in the example file the blank line after the fourth line is retained; but lines 6, 7, and 8 are “squeezed” out: 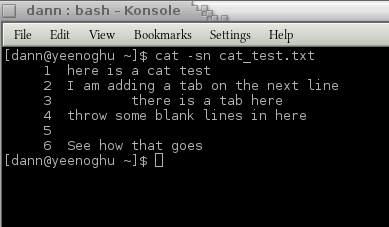 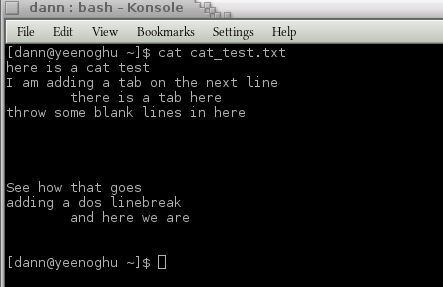 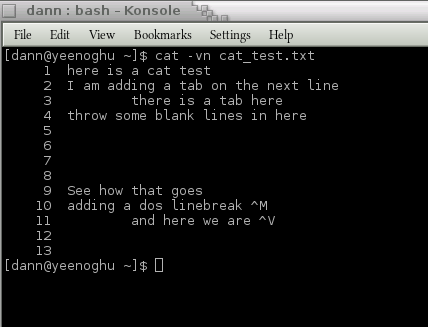 Note the ^M and ^V characters on lines 10 and 11 respectively. 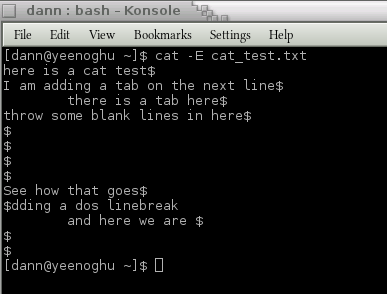 To show tabs in a file use the -T, or –show-tabs, switch and tabs are replaced with “^I”:

There are a few aggregate switches that combine options:

Issued like this by itself the cat command will echo back what is entered through standard input once the “enter” or “return” key is pressed.

The cat command has no pager functionality so all content that the command displays will scroll off the screen. Using a pipe, “|”, output from the cat command can be passed to a pager like less or more:

The cat command is a handy utility for viewing the contents of a file or redirecting the contents of one file into another. One example, culled from the Linux from Scratch documentation is to use cat as a quick and dirty text editor:

This example cats all standard in to test.sh until a single line containing “EOF” is listed. At which point cat closes the file and exits. Using cat like this or with other commands like cut, head, and tail one can perform some pretty sophisticated text manipulation.