The time program is a handy tool to not only guage how much time in seconds it takes a program to run, but will also display how much user CPU time and system CPU time was used to execute the process. To understand these values you must grasp how the kernel handles the time reporting for the process. For example, the output of:

The first line, real, is how much real time or “wall-clock” time the process took to execute. In this case, 0.007 seconds or micro-seconds. The second line, user, is how much user time the CPU used. User time is amount of time the CPU spends performing an action for a program that is not a system call. The third value, “sys” referred to as system CPU time, is the amount of time the CPU spends peforming system calls on behalf of the program. A system call is a request made to the Kernel by the program. Therefore, CPU time is the total of user time plus system time. CPU time will not necessarily equal real (wall-clock) time, and if it does not total CPU time would be less than wall-clock time. There can be many reasons for the discrepancy between wall-clock and CPU time including the process waiting for another process to complete. In the example above total CPU time is 0.003 seconds where as wall-clock time is 0.007s.

Most distributions have the time command installed under /usr/bin. Executing:

Should output the path to the time command:

To use the time command as opposed to the bash built in command you must provide the full path to time:

Note that the output is quite different:

There is a lot more information provided compared to the builtin Bash time command.

The first three items: 0.00user 0.00system 0:00.00elapsed should look familiar. These values are user CPU time, system CPU time, and wall-clock time respectively. To understand the remaining values better focus will be directed on how to actually format the output of the time command. This is done with the -f, or --format=, switch followed by the formatting strings. Similar to the date command, the formatting strings are in the form of “%” + variable:

Now that these values have been defined the output of:

From above can be further explained:

As stated, formatting of the /usr/bin/time command can be done with -f, or --format=, switch followed by a string including the above variables:

To emulate something like the output of the Bash built in time command you could execute:

Or you could pass the -p, --portability, switch which provides the same formatting:

The output of time can be directed to a file with the -o, or --output=, switch and supplying the file name:

This would redirect the output of the /usr/bin/command to the file times.txt. If you executed the same command again, it would overwrite the original times.txt file. If you want to preserve the original contents of the times.txt file use the -a, or --append, switch with the -o, --output=, switch:

The final switch to discuss is the -v, or --verbose, switch which will output all the values possible that /usr/bin/time can report regarding a process. 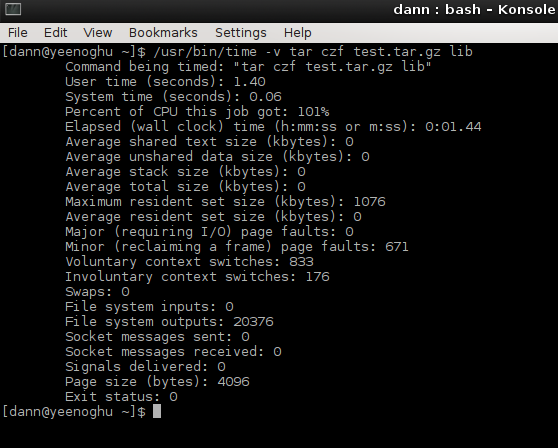 Video failed youtube processing, will be up shortly, use archive.org link below.